Bob attended the Ackerman one room schoolhouse before graduating from Jasper High School in 1953. Seeing the need for a good 24 hour restaurant in Jasper, the Ruckriegels opened Jerry’s Restaurant 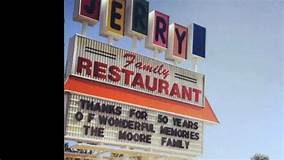 in 1964. With friend and business partner Dave Buehler, and the opening of this single location, a restaurant company was formed. It would eventually be known as BR Associates with hospitality units in six states (Indiana, Kentucky, Michigan, Illinois, New York, and Florida).  In 1986, Bob was recognized by the hospitality industry as the sixth largest multi-concept private restaurant group in the nation. Following in their father’s footsteps, sons Al and Sid started their own restaurant company operating over 50 units. In 2014, while celebrating 50 years in the restaurant industry, the Ruckriegels combined both companies to form SERVUS.

Bob was also a philanthropist, and a long standing pillar of the community.

Bob served on many boards including Dubois County Tourism Commission, German American Bancorp, Kentucky Wesleyan College, Northwoods Good Samaritan, Junior Achievement,  Jasper Planning Commission,  Long John Silver’s Advisory, and Jerrico. He received the Ernst and Young ‘Entrepreneur of the Year’ award as well as numerous ‘Franchisee of the Year’ awards. He was named a Distinguished JHS Alumnus and ‘Good Citizen’ by the Lincoln Heritage Boy Scouts.  In 2015 he was an inaugural inductee to the Dubois County Business Hall of Fame. He was recognized as an ‘Indiana Sycamore’ and a ‘Kentucky Colonel’ and he and his wife received the “Key to the City” of Jasper, which they claimed meant the most to them since it left a positive impact on their hometown.